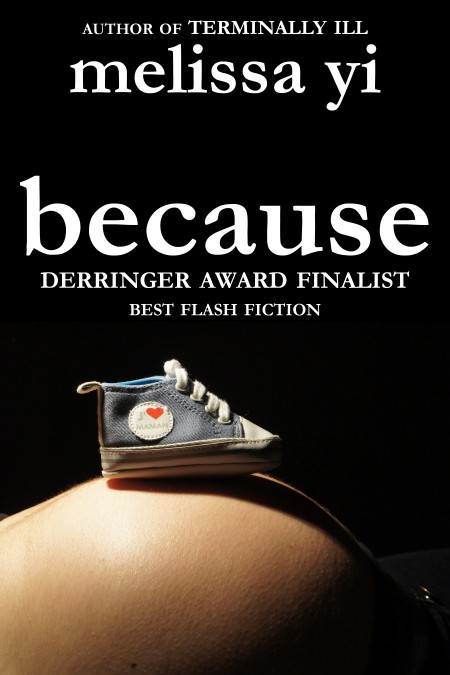 I was toiling at the end of my emergency room shift when I got an unusual message. I turned to my colleague and said, “Hey. I’m a finalist for the Derringer Award!”

“Do you know what that is?”

“I assume it’s a writing award.”

“It is. For the best short mystery stories published in the English language.” I revelled in it for a second, and then I said, “Do you know what a Derringer is? It’s a pocket-sized knife–”

“It’s a gun, actually. A small one, easily concealed and favoured by prostitutes.”

I Googled it, and a bunch of gun pictures came up. “Well, still. Because it’s small, it’s a metaphor for the deadly power of short fiction.”

A Derringer. Not a knife. Who’d have thunk it? Plus, this one looks like it’s wearing lipstick.Photo by DuBoix on MorgueFile

“Why do you keep saying that?”

Anyway, the important part is that I’ve been shortlisted for the Derringer. So to celebrate, I’ve turned “Because” into an e-book with an essay detailing the genesis of the story at Kris Rusch and Dean Smith’s Oregon mystery workshop, plus observations on the writing life, and what it feels like to hit the Derringer short list, for $2.99.

However, since I love you, my people, I’m giving the story away for free right here for the next seven days.

You can also download Code Blues, the first Hope Sze medical mystery, for free exclusively through the Vuze book bundle. Only until March 16th. Then it will disappear like a sociopath’s conscience. So grab it now! http://blog.vuze.com/2015/02/24/new-medical-thriller-book-bundle-melissa-yi/

While the Short Mystery Fiction Society votes on the Derringers, I do have one weapon in my back pocket. I’m the newest recruit for SleuthSayers, the world’s slickest crew of crime writers and crime fighters. Two of their members, Melodie Campbell and Rob Lopresti, have already won the Derringer (Rob won it twice)! So maybe they’ll help larn me.

Because you were so fat that I could count the rolls through your T-shirt, and know that they’d build across my belly and back in the exact same way.

Because you spent the check every month, and you never gave me a penny, not even if I needed a new eraser for school. “You just ask your fancy teacher for one. Go on, ask.”

Because I had to ask, and their eyes would burn me with their pity.

Because you’d spend hours painting your nails, but never let me touch any of the bottles, just because I broke one when I was two.

Because I hated the sound of your crinkling chip bags.

Because when Daddy said he was leaving, you said, “Go, then,” and let him walk out the door, even though I screamed and cried.

Read the rest in the format of your choice here (http://melissayuaninnes.com/books/because). Thanks for stopping by. Since people do seem to like freebies, I’ll give away more stories in the future. I may try and coordinate them with my biweekly SleuthSayer posts. The next one is March 23rd. Cheers!

I chose to publish this today because my EQMM buddy, Steve Steinbock, got his “What I’m Working on Now” column published at Sleuthsayers. Yay, Steve!

We’re heading into the August long weekend in Canada. Perfect camping time, should you choose to do that kind of thing. I don’t, but my friends do.

I’ve already waxed eloquent about Rob Brunet, the up-and-coming mystery writer whose first novel, Stinking Rich, will debut September 8th. His short stories will appear in Ellery Queen, as well as just about every other mystery magazine, and is just an all-around good guy. Bought a round of drinks at Bloody Words 2014, too (I don’t drink much, but I admired his generosity). Check him out:

The smell of a tent is distinct. The vinyl (?) bottoms of the new ones vs. the canvas of old. True dark when the fire burns low. Super bright stars. What’s on the ground? Bare rock, pine needles, well-worn hard-packed earth. Crickets or frogs at night. Birds in the morning. The smell of the fire. Coffee that you wouldn’t touch in the city but sooo good in the bush. God, I miss it.

Ryan Aldred is an interesting guy. I met him at Bloody Words as well, at our banquet table of young, hungry writers, and he was the first person to seriously suggest joining Reddit. He started the Bar on a Beach mystery series, with its inaugural novel, Rum Luck.

Cicadas in the treetops on a hot day. Clothes that smell like wood smoke for days afterward. Three feet of warmth at the top of a Canadian shield lake and the fifty feet of inky cold beneath. Looking up in the sky and seeing hundreds of thousands of stars. The whoosh and sizzle of a marshmallow catching fire. Moths the size of your palm bumping into the globe of a lantern. Haunting loon song as you fall asleep at night. Beads of moisture running down the outside of the tent after a morning dew.

Like what you read? Both Rob and Ryan will read at Noir at the Bar in Toronto on August 20th, along with the always-intriguing Tanis Mallow.

I’m working on today, but I would have liked to see the sold-out Majinx tribute to Houdini at l’Orignal Jail. I might still see if I can sneak by.

You see how I did that? Turning a holiday weekend into a hotbed of criminal writers and performers? You’re welcome.