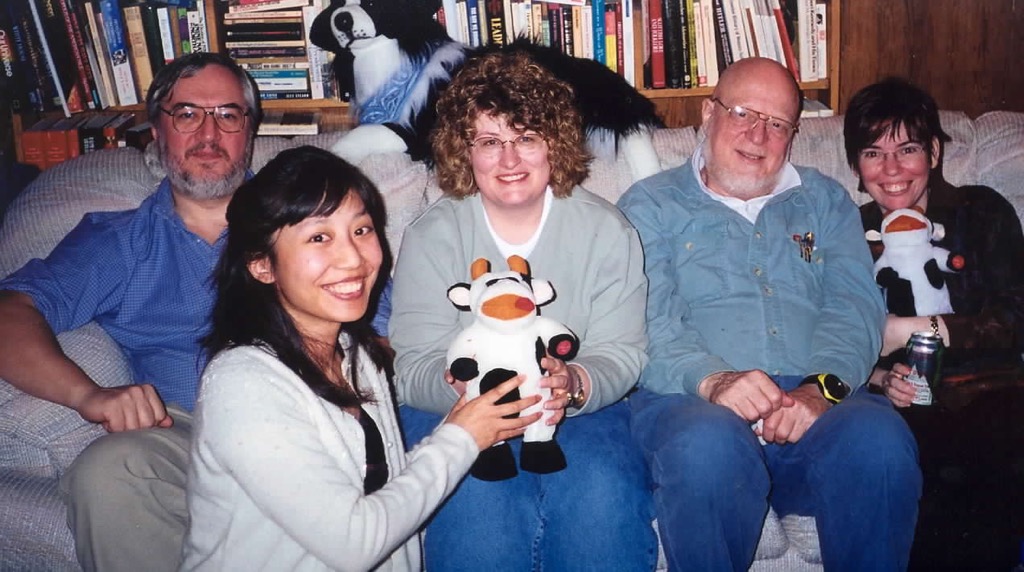 I’ve been learning from Kris Rusch and Dean Wesley Smith since 2003, when I managed to cut together one week’s vacation and another rotation’s conference week out of my emergency medicine fellowship year to attend their two-week Master Class.

“They broke me down and built me back up again,” said Ilsa Bick, who had won Writers of the Future with me.

“I’m coming back to ICU. I don’t have time to get broken down and built back down again,” I replied. I also lived in Montreal, three time zones away from Kris and Dean in Oregon. So although they explained that a big part of learning was staying up late and talking, I’d already spent something like six hours in class per day, plus the writing exercises and technical assignments, including writing a 10,000-word story and two stories that were minimum 3000 words each (up to 8000 words, I think, but I never hit the upper limit). The second class ended at 10 p.m. their time, or 1 a.m. my time. The group would chat and learn from each other while I’d wave and hit the bed immediately.

I kept coming back to Oregon, and then Las Vegas when they moved. I kept learning. For example, at the first class, Kris told me flat out for a pre-printed story, “Your font is too small. I don’t care if it’s 12-point. An editor’s livelihood is her eyes. I could not read this story.” (Everything is paraphrased because it took place so long ago.)

Weird Tales had told me the same thing and asked me to use a 12-point font. But since it was already 12-point Times New Roman, I had continued to send out stories in the same font, destroying editors’ eyes.

And ensuring the rejection of my stories.

That was only a font issue. I endured two weeks of other writers tearing apart my words, or not reading my story past the second page.

Kris explained at the end of the Master Class, in her one-on-one session with me, that I was extremely different from other writers. “Publishing will have to create a new category for you. You’re not supposed to compare to other writers, but Robert Jeshonek is someone that, if they ask for a story about a spaceship mission, he’ll write from the point of view of the spaceship. You’re not like that. You’re extremely direct, to the point where it almost makes people uncomfortable. But you need to develop your toolbox. Read Jeffrey Deaver’s short stories.”

Kris and Dean talk about character, setting, plot, emotion, punctuation, etc. as tools in your writing toolbox. So I read Deaver’s short stories, as well as my fellow writers’ work, and was amazed at how theirs had improved. In fact, I burst into tears after one workshop at 3 a.m. PT (6 a.m. ET) because they had written so well that I felt inadequate, and the lovely and talented fellow WOTF winner Leslie Claire Walker had to talk me down and assure me that I, too, had levelled up. (Leslie also never shared a room with me after that, which I choose to think of as coincidence. I also do love the book that emerged from that conference, Dancing Through the Chaos)

Kris mentioned that she’d looked up from one of my early stories and said, “She’s brilliant.”

“I don’t understand her,” Dean said.

Kris instructed me that my level of detail was either way too vague or way too detailed. “People are confused.” I spent years fine-tuning that skill.

More pearls of wisdom from Kris and Dean:

You are responsible for your own career.

Me: Everyone else here wants to quit their day job. I’m not even finished becoming a doctor, and I don’t know if I’ll ever quit. I worked too hard to become a doctor.

Kris: [smile] That’s a good thing to know. Good for you.

I kind of stared at her, waiting for her to order me to fall in line with everyone else, but she continued to smile without adding anything.

Permission granted to continue my own path instead of following anyone else’s.

Dean: Kris won the Hugo … and then the Hugo again … so much success with the Smokey Dalton series …

Me, afterward: Does this mean you’ve done everything you ever wanted in writing?

Kris: Not even close.

Me: I get that. So you’re going to concentrate on the Smokey Dalton series now?

Kris: No! I need my sweet romances after I write Smokey.

Cool. More mountains to climb for all of us.

And permission to write multiple genres, when everyone else told me to choose one or I’d never succeed in publishing.

I e-mailed Kris I couldn’t write fiction after we lost our first pregnancy at 20 weeks. I thought she’d yell at me to be more efficient.

She said something to the effect of, I’m surprised you’re writing at all. You need to grieve. Don’t force it.

Wow. Permission to grieve. How about that? I worked hard to experience what was happening without trying to control it.

Eventually, I wrote again. Kris said that my writing had come back stronger and more heartfelt than ever. But first, and periodically, I waded through sorrow and anger and self-recrimination. I eventually wrote Your Baby Is Safe and Buddhish. It helped me understand my fellow humans with empathy. But as one woman told Sylvia Boorstein in It’s Easier Than You Think, “Cancer has made me a better person. But I would rather not have cancer.”

When I finally had a healthy baby named Max, I cut back on my writing and assumed Kris would fault me for it.

Kris: You will never get this time back. I love my nephew. He’s a wonderful young man. But I still miss that little boy.

I miss baby and toddler Max and Anastasia now too. As they were growing up, I tried to write enough to keep me sane, while spending time watching baby TV (staring at them), nursing them, and introducing them to the world.

I still remember visibly startling baby Anastasia by opening the cabinet door to reveal stuff behind it, including our rice container. And then the whoosh of rice as I poured it into the rice cooker. Her entire tiny body wavered in the air as she processed the wonder of the world.

The next time I made rice, she didn’t react. Old hat already.

Much of this is not the actual mechanics of writing. Kris was instrumental in helping me fine-tune my left of detail, how to let information flow, how to integrate and even enjoy writing setting. Yet what I remember most is how to live, not how to write.

I also knew that Dean didn’t “get” my writing even before Kris told me, which didn’t bother me too much. You can’t write for everyone. Write for yourself. Write for your tribe.

Still, I was touched when Dean invited me to the Past Crimes Storybundle and called me a “rising star.”

Another sign that, even if I haven’t “made it,” at least I’m climbing the ladder.

The New York Times featured me in their business section, a spot I earned in part by my writing. They asked for financial stories, and I answered, knowing that the way I express myself would probably catch their attention, in addition to them likely wanting more diverse testimony. My financial approach is outlined in my three webinars. The first is an overview, the second explains exactly how to move to low cost exchange-traded funds, and the third describes FIRE, or financial independence and retiring early. You can buy all three at once. I’m not a licensed financial advisor, but we are financially independent, which means we walk the walk.

These accomplishments aren’t money. They’re not rankings. But when The Most Unfeeling Doctor in the World first hit the bestseller list, money didn’t make me happy. It made me anxious, wondering if it would continue. I can make money faster and more reliably through medicine if I want. I decided instead then and there that my goal was to have writing to connect me to “people, places, and things that excite me.”

Elizabeth Gilbert promised her writing that she would always take care of it. She didn’t mind working other jobs so her creativity could relax. “But to yell at your creativity, saying, “You must earn money for me!” is sort of like yelling at a cat; it has no idea what you’re talking about, and all you’re doing is scaring it away, because you’re making really loud noises and your face looks weird when you do that,” she wrote in Big Magic: Creative Living Beyond Fear.

Of course I want to reach more readers, which means making more money. But I also want to relax and enjoy my summer and see my children.

So please pick up the Past Crimes Storybundle if it pleases you to read excellent books at a price you set, and you want to support both authors and a worthwhile charity.

And keep reading and writing!