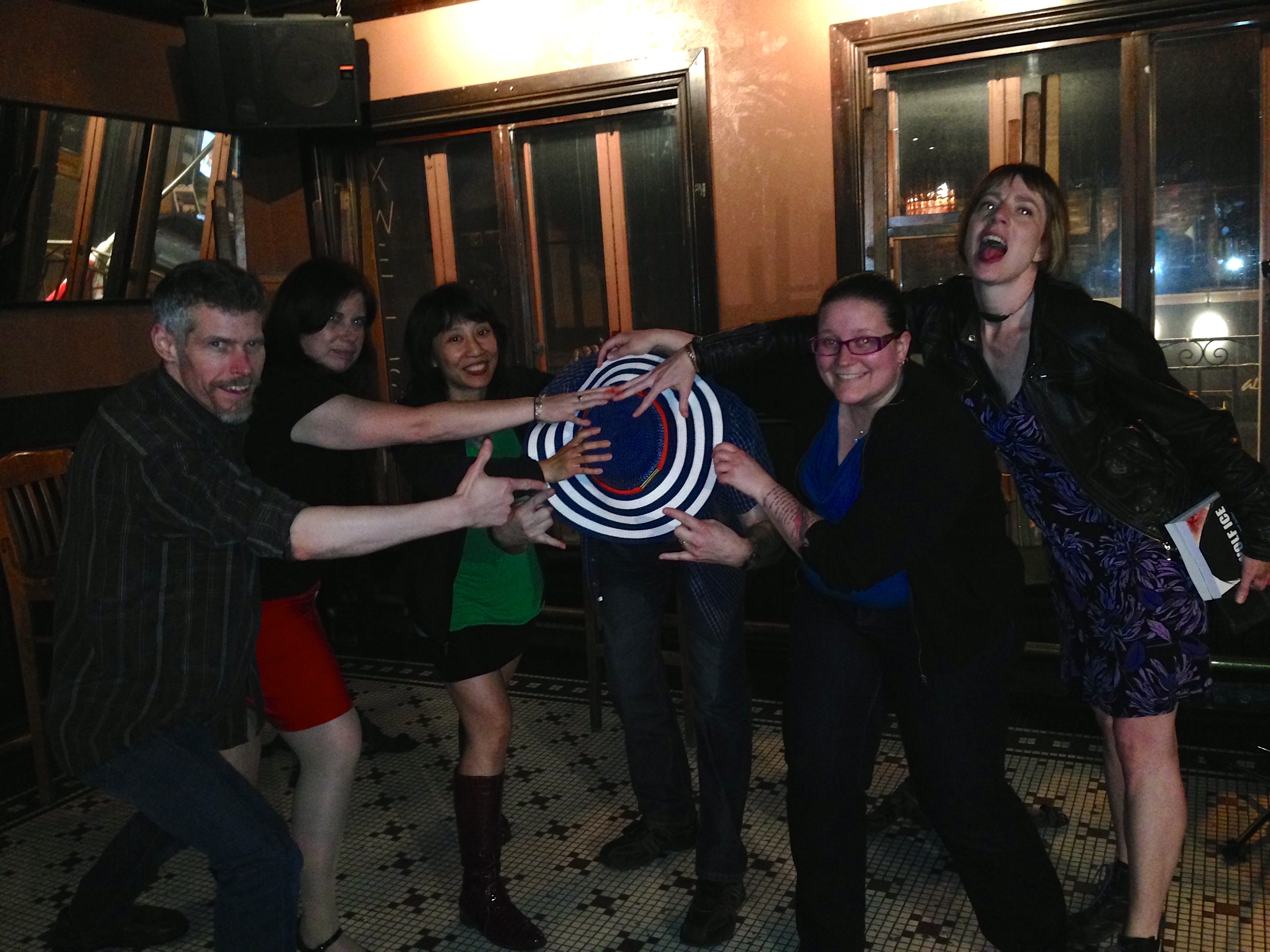 This is a story about a woman who’s a wolf. And a wolf who’s a woman.

When ChiZine’s Sandra Kasturi invited me to their reading series in Toronto, I said, “Sure! You know I don’t live in Toronto, though, right?”

Fortunately, their Ottawa division invited me on June 9th, and I scored a CHEO shift that very day from 10-5. So I was already going to be in town. Perfect. All I needed was some speculative fiction to market.

“Is swearing okay?” I asked Nicole, the ChiZine organizer extraordinaire.

“Sure. We’ll just put you last, in case any children come and the parents can discreetly usher them out before your reading.”

I could censor the opening, but I knew I’d rather let the four-letter words fly. So don’t read on if that’s not your cup of sake.

First up, Kate Story read “Show and Tell,” her doll tale that will appear in The Playground of Lost Toys. Wicked story. It would have to be, since the editors warned us that most people had written about dolls and stuffed animals, so the one chosen story would have to be exceptional. I look forward to delving into Blasted, her first book. It had never occurred to me to read a short story, even though I will appear in the selfsame anthology with my story, “What Not to Expect in the Toddler Years.” Kate seemed like a hilarious, talented powerhouse. Even before the reading, she was talking about how the president of Iceland headed up the gay pride parade, whipping a bunch of men in diapers who were actually her ministers, and all the Icelanders nodded approval and clapped, like this was normal. I was never tempted to visit Iceland until now.

Then James Moran read Town & Train. It’s a fictionalized version of Cornwall. How could I not buy that! He said that every time he sold a copy at the Cornwall Pop Event, he and his neighbour would fist-bump. When we were gathering ’round for photos, he put his arms around me and Kate and said, “Wow, you’re both tiny. Do you jog?”

“No! Hate jogging! Never do it!” cheered Kate.

Finally, I read Wolf Ice. My mother was in the audience. I tell you, I hesitated before I said the word “nipples” in front of my mother. But she didn’t flinch. She never used to read my stories, but this time, she took photos of me, bought a copy AND couldn’t put it down, as I described in my Sleuthsayers article. This is a bit weird, since it’s my racy-est book, but if she can handle it, maybe you can, too. Here’s the first chapter:

I hopped into Elena’s red Honda Odyssey, which vibrated so hard from the White Stripes’ bass line that I felt, more than heard, my door thump shut. Elena tossed her blond hair and bared her teeth. “Ready to rumble?”

I threw back my head and howled my answer. It kicked ass to desert Montreal once a month and go wild. If my biological clock didn’t demand it, I’d have to do it anyway.

At first I thought she meant she was going to spar with me when we got to the campground I’m negotiating to buy, but her glance flicked to the rear view mirror. She grinned.

I checked out our compatriots in the rearmost seat. We always carpool. It’s more environmentally sound, plus, worst case scenario, if one of us ‘shifts too much on the way, someone else can drive. Elena almost always drives and I ride shotgun. Mac and Laurent usually fill the back seats, plus one to three other pack members join us.

I said hi to Mac, our resident redhead. He’s a few years older than us, which means he’d broken through the big 3-0, but he still looked like Richie Cunningham. Like me and Elena, he doesn’t ‘shift until almost the last second the sun disappears and the full moon rises, so he drives occasionally.

Laurent’s the opposite: bad five o’clock shadow two days before the full moon. We practically have to smuggle him out as our wolf dog if we leave too close to evening. Today he hung out by himself in the van’s rearmost seat like a French Canadian version of Slash. What makes it more hilarious is that in the Real World, Laurent is a clean-shaven lawyer.

I twisted to look directly behind me and hissed involuntarily, baring my teeth.

“Nice to see you, too,” said Jack. Also known as Jack Meng, paramedic, or as I prefer to call him, scum-sucking motherfucker.

“Yeah, I’ll bet that’s what you’re hearing.” She merged on to the Décarie Expressway, gunning ahead of a police cruiser.

Was I that transparent? I sure hoped not. Of course, I also hoped I was impervious to Jack’s Chinese-Canadian werewolf charms, but my triple-digit heart rate testified otherwise. My parents had always hoped I’d marry a guy who a) was Chinese like me, b) scored a good job, c) had sprung from a decent family, so we could d) make nice yellow babies. Until Jack, I’d never met an Asian guy who rang my bell. Before I could bring him home, though, Jack showed off his true player colors. Finito.

I changed the radio station and lowered the volume before the first, familiar chords of “Werewolves of London” came on. I stiffened.

“I’ll change it.” I reached for the button. The song was pure cheese. The only one that bugged me more was “Layla,” by Eric Clapton, because kids used to tease me that the song was about me.

“Yeah, don’t you have any team spirit?” said Mac.

Only Jack didn’t say anything. Maybe he remembered how we used to laugh and kiss and do the wild thing to this song.

The chorus kicked in and we all howled along with it. Jack’s tenor rose in the air. The hair on my neck prickled and my nipples stood at attention. I crossed my arms, but there was no way to get around it. Scummy motherfucker still sounded—and smelled—like heaven.

Eventually, I relaxed to Sheryl Crow while Elena munched beef jerky and gunned it along highway 20, weaving through April’s early tourists and bad-tempered commuters. An hour later, we crossed the provincial border into Ontario. First exit, Curry Hill, toward the fifty acres of land our pack’s going to buy.

I love nature. I love mosquitoes, sweat, and mud that sucks off your sneakers. I love to run and scream out of pure joy, and it doesn’t matter because no one can hear you, or if they can, they’re running and screaming too.

In four short weeks, this would be our new stomping ground.

Elena still drove like she was in Montreal, passing a tractor even though a black GMC truck was already pulled over on the shoulder. She took a left at the faded sign for KOA CAMPGROUNDS. Maples, ash, and pine trees unfurled their new leaves and needles in welcome. We bumped over the frost heave potholes in the dirt road.

“We’ll have to fix the road,” grumbled Laurent.

“The water and sewage hookups still work,” I countered. “And wait ’til you see the river.”

“Awesome,” said Elena. I grinned at her until she rolled down her window to toss a beef jerky wrapper on to our new homeland.

At my look, she stuffed the wrapper back in the cup holder.

“Thanks,” I said. I sniffed the fresh air. I loved the smell of damp earth, that gentle hint of warmth and spring. I inhaled deeply, closing my eyes, and smelled Jack. Even for a werewolf, I’ve got quite the nose.

I blushed, which made me mad. I tried to concentrate on Elena instead. She smelled like herself, calendula, and beef jerky. She gets hungry before she ‘shifts. Like PMS times a thousand.

I laughed. “Two towns, about 20 minutes north and west. This land’ll be all ours. The Ottawa wers’ve been calling me, though. They want in on it, too.”

Elena couldn’t pull right up on the campground because the ground was too boggy. We carried our tents about 20 feet from the dirt road.

I set up my tent, trying to ignore Jack working on his to my right. My tent is a two-person job from Mountain Equipment Co-op, kind of like a little white nylon igloo held up by retractable metal poles. A tall five-year-old could set it up.

“You have good taste,” he said.

“What?” I snapped to attention. Conceited bastard, saying I have good taste for gawking—

Oh. Right. Only the entire focus of my work life. “Yeah, thanks. I wanted a green space not too far from Montreal.”

When I tore my eyes away from Jack’s intense brown irises, Elena’s little red tent caught my eye. It was still sitting in the open trunk of her van.

I started toward it, still feeling Jack watching me.

“Leila!” Mac flagged me to the south side of the campground.

I glanced at Elena’s tent again before I jogged toward Mac. Jack matched me stride for stride.

His face looked paler than usual under his growing ginger beard. “Elena’s missing.”

I must shout out to ChiSeries. It was the most professional reading series I’d ever participated in. Not only did they pay an honorarium to each speaker, they manned a book table for us and did NOT take a percentage of the earnings. No wonder they were nominated for the Aurora Award.

To help make ends meet, they did pass the hat. Literally. Marie Bilodeau, a professional storyteller, told a hilarious tale about how she picked out the hat. If we reached $50, emcee Matt Moore would wear this beauty for the rest of the night.

They didn’t reach $50 on the first pass, but my mom was so excited, she made a trip to the donation table with $5 and that was enough to tip them over into hat-wearing territory.

Note that the hat is made of straw. Matt is allergic to wool. As in, he will faint if he wears it for too long. So he almost dropped the first time he unwittingly did the hat trick with wool. Mystery authors, yet another bizarre way to kill someone! Death by lanolin.

I also got to speak briefly to Marie, who quit her day job. I adore her blogs about this:

Marie mentions Roomy in her blogs. Not only did Roomy come, but she made brownies of Matt wearing hats! Especially delicious if you hurried from CHEO with no dinner.

I shook hands with Derek Künsken, who’ll become a full-time writer for the next two years. Everything he’s writing is selling at a high level, he’s got interest in his first novel, he’s got the financial cushion, and he wants to spend more time with his ten-year-old son. Derek also carried my rolling suitcase of books upstairs, so extra good luck to him.

In sum, if you’re an author, do your best to claw your way on to the ChiSeries reading series! Well, we’re Canadian, so we’d probably just send a polite e-mail. But you know what I mean.

And if you’re a reader, ChiSeries is curating new and exciting voices across Canada. So, yes, T.O., Ottawa,  but also Vancouver, Winnipeg, and Peterborough (I have a soft spot for Peterborough because I did two locums in Lindsay, Ontario). You can’t ask for better.

I said this story was about a wolfish woman. Of course I was talking about Wolf Ice, but I also consider myself a wolf. As in, I love my pack, which is better than ever now that I’m in ChiZiner territory. Big kisses.

P.S. I missed the Ottawa Fringe Festival, so I’m writing this while listening to the The Dirty Dozen Brass Band at the Ottawa Jazz Festival. Fabulous.